My fourth in the series commemorating the sailors who perished on the Carl D. Bradley. This is in dedication to deckhand, Dennis D. Meredith.

The Carl D. was a steam ship that carried limestone on the great lakes from 1927 until it sank in Lake Michigan, just off Gull Island, on November 18, 1958. It was honored in 1943 for being the first Lake freighter to pass through the new MacArthur Lock, which is part of the Soo Locks.

While it's registered port was in New York, it's true home was at Roger's City, Michigan. It belonged to a fleet of ships owned by U.S. Steel Corp's. Michigan Limestone Division and was named after Carl David Bradley, who was president of the company at the time. It was the largest freighter on the lakes for 20 years, and was known for being flexible, and a bit bendy, which made it easier to handle on the tumultuous lakes.

On the night of the fated sinking, one of the worst storms in history hit the Great Lakes states - most other boats had docked to wait out the storm but the Carl D. Bradley's captain allowed the ship to continue on course. They had a deadline. The steamer never made it to it's destination, Roger's City, where 23 of the 35 men on board were from. A mayday was sent out after it was obvious that the ship had split in two, then contact was lost. A German cargo vessel, the Christian Sartori, witnessed the sinking, which only took a matter of minutes from the time the ship suddenly split, but because of the ferocity of the storm, they were unable to reach the sinking vessel. The Coast Guard was contacted, and the Cutter Sundew was sent to help but in the end, there were only two survivors. Fifteen of the men were never found.

After recently reading Michael Schumacher's harrowing story of the shipwreck: Wreck of the Carl D., I was compelled to do a series of work honoring each of the men who lost their lives that night. Deck watchman, Richard Book, became my muse, and this summer I will be visiting his gravesite in Westphalia. After a lovely conversation with his brother, I know I have made the right choice, and have also made a new friend. 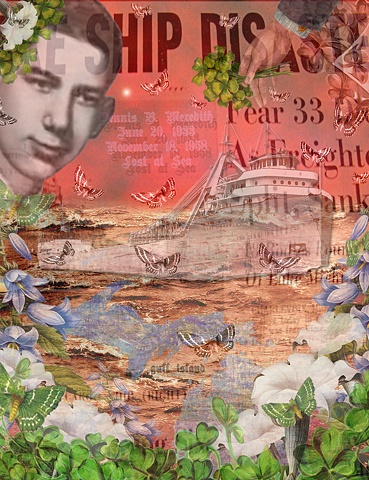