Scroll past images for more information about this project, and the list of participating artists. 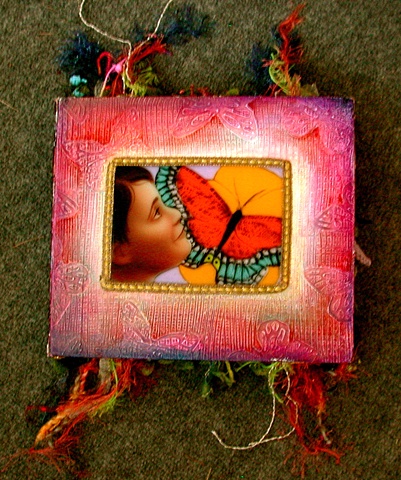 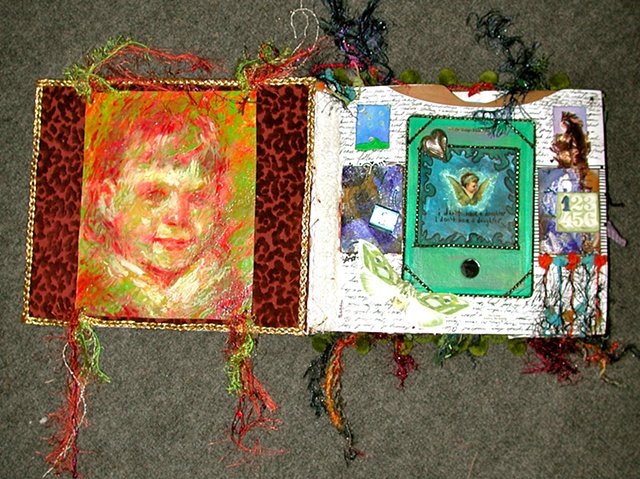 Inside front cover and first page 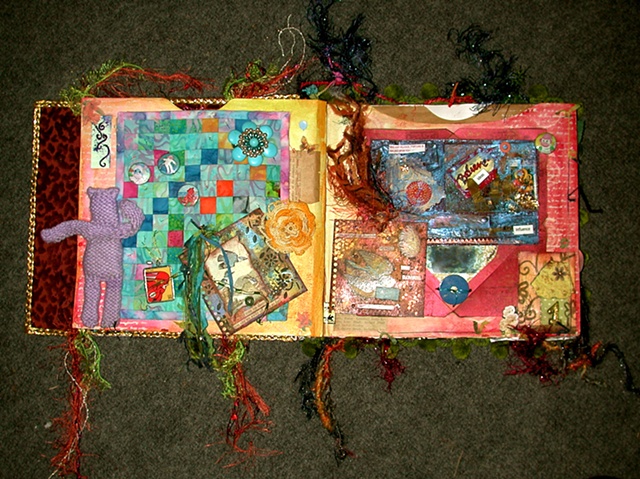 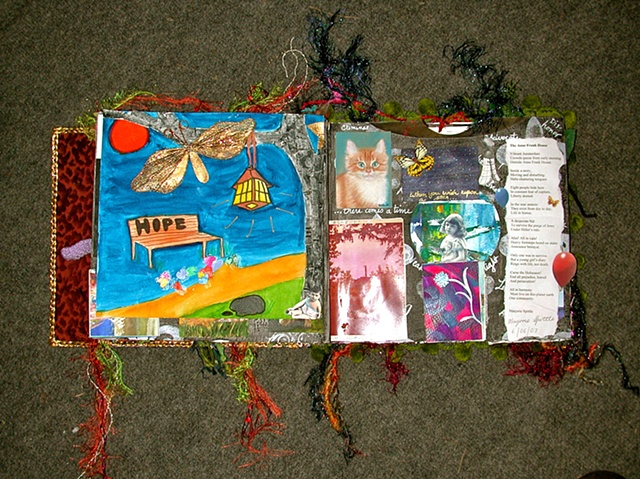 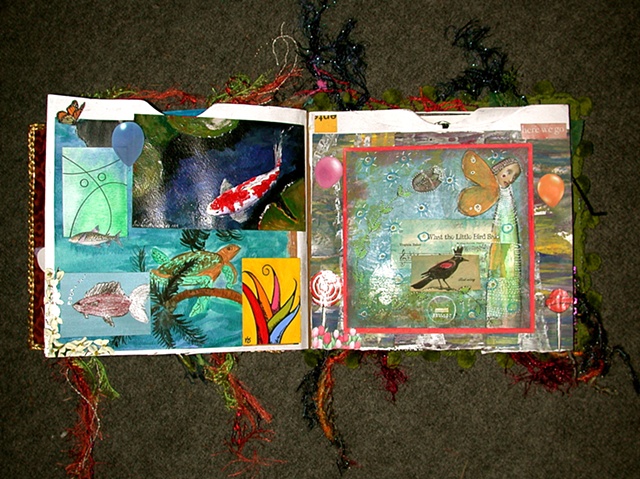 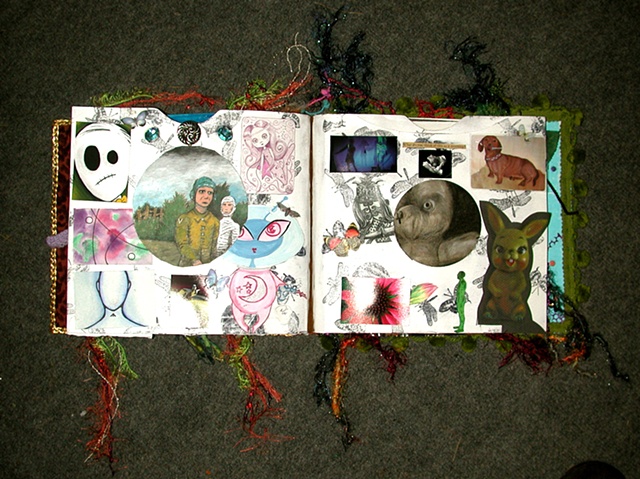 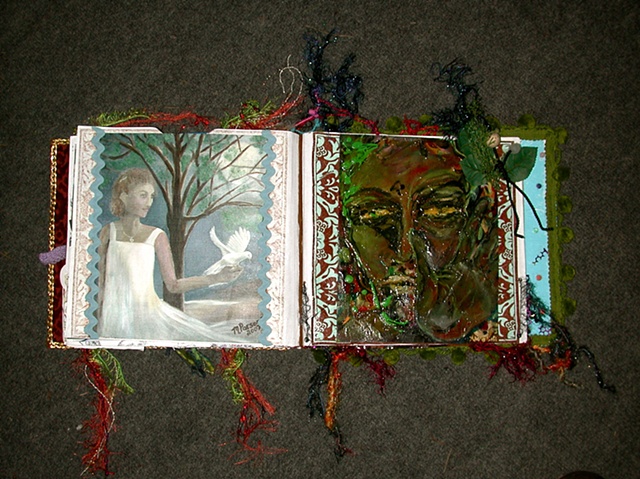 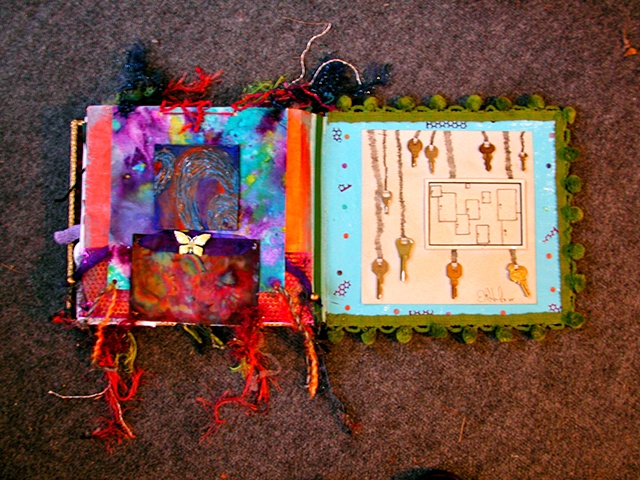 Pages 12 & Inside Back Cover 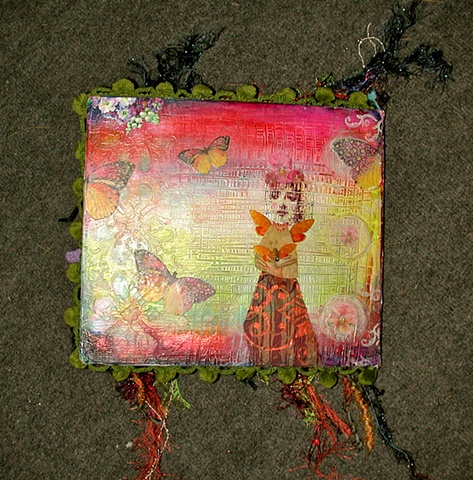 The first Honor With Art project began in early 2005 as a way to turn some of my personal fears and guilt into something positive. As the survivor of a near-abduction when I was twelve, I found myself fearing the same for my daughter. Guilt came later as I realized that by opting out of testifying against my perpetrator, I may have been responsible for letting him go free, however, I never did find out what became of him, or whether he actually ended up in court. All I know for sure was that I was lucky to have escaped a man who ultimately chased me down when I refused to get into his car.

Response to my initial "call to artists" in 2006 was astounding. Over 100 people signed up to participate--almost all of them did. Early on I thought the project would be finished by now, but we are still only halfway through, although, the hardest part is done--my goal of filling a huge "altered book" has been reached. I filled that book and created a lovely, one-of-a-kind masterpiece with the beautiful artwork that was donated by some amazing and very talented artists.

Both the front and back cover of the book were designed by me, but the highlight of the front cover is a lovely 5 x 7" glass panel that was created by glass artist, Dawn Lee Thompson. This image was perfect for this book, and is a true reflection of the vision I had when I embarked on the project. I can't imagine anything else on the cover.

Please note: the photos I have included will be replaced by better quality photos with more detail very soon. I felt the need to put this up for now while I am doing a million other things. Please feel free to contact me with questions, and please check out the Honor with Art website for more information, although, I haven't kept it as up to date as I should. You can read more about my experience and find a list of contributors there, until I update this page further.

I will also add images of all the leftover art as well. If you are an artist who donated work and you don't see your piece in the book, don't be alarmed--every last bit of donated art will go in the box that will contain the altered book as part of this project. All submitted art can be seen on the Honor With Art website in the Gallery.

A list of all the original artists who signed up is as follows: